This illustration was made in the spare time and interrupted many times. I also changed render engine, from C4D physical render to V-Ray for C4D. In this making of, I’ve tried to simplify the process and make it more understandable to the reader. 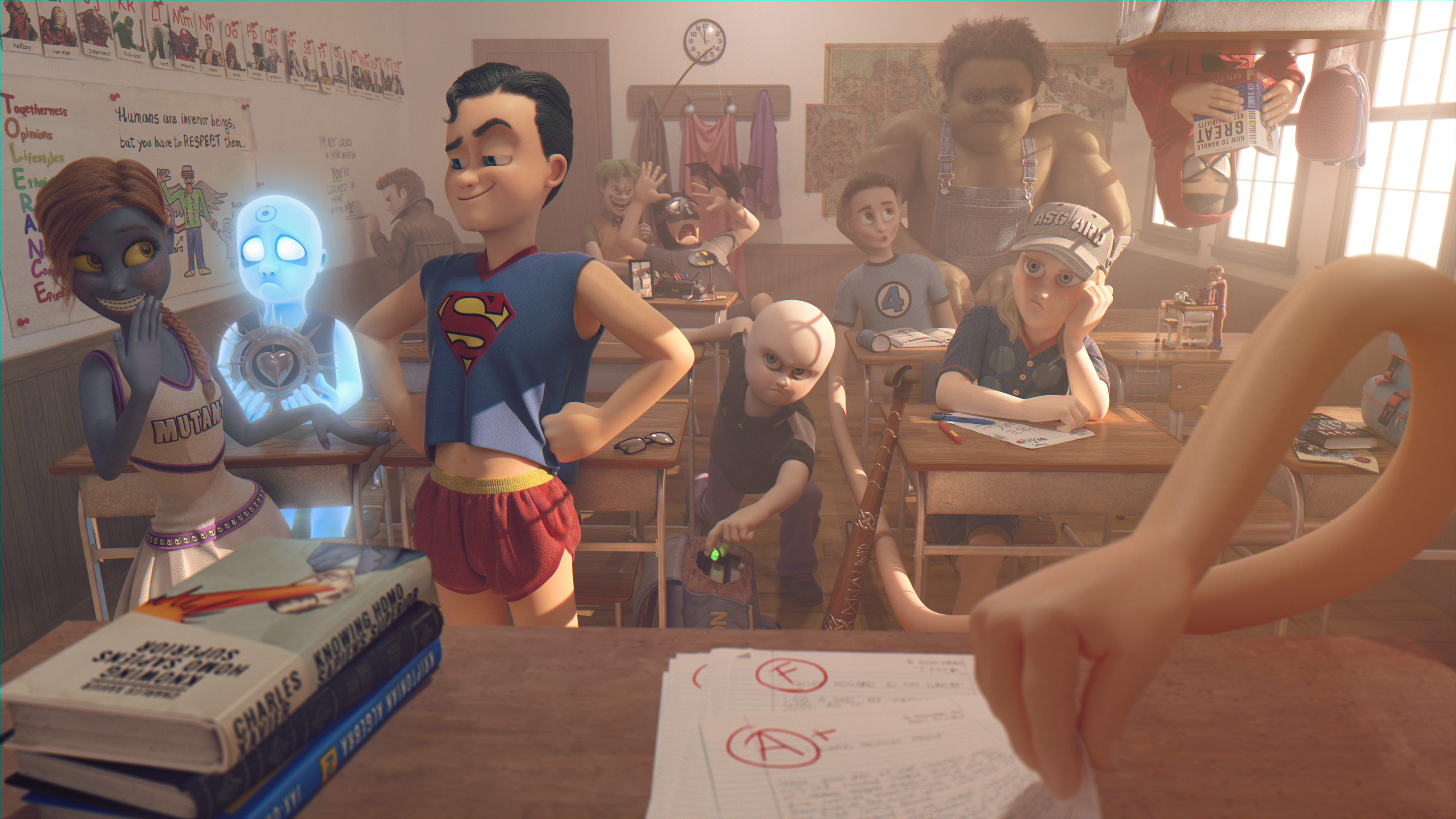 I started this image for the contest “Baby Comics”, in this website, years ago. We had to imagine superheroes in their kid versions. My idea was a classroom with a bunch of superheroes schoolboys left alone by their teacher for a moment. I put together good guys and bad guys, in order to create conflicts and old rivalries. I tried to give a characterization to all the kids, some similar to the original personality, some opposite:

-  Superman is the most athletic/handsome/cool kid of the school, vain and full of himself.

-  Mystique is a ditz cheerleader, attracted by the bully, but privately unconfident about her body.

-  Dr Manhattan is a sensitive kid, in love with Mystique (blue like him), for which he creates a glass clockwork heart.

-  Thor is a baseball fan (Mjolnir is his bat) and he loves Mystique too. She is his deskmate (and also the only girl in the classroom), and Thor hates Superman, because she has eyes only for the kid of steel.

-  Lex Luthor is a rich not-so-handsome kid and he takes advantage of the situation and put a kryptonite marble ball in his despised enemy’s schoolbag.

-  Spiderman is a quite kid, too busy to learn how handle great responsibility to worry about his classmates.

-  Mr Fantastic is a brainiac, too curious and impatient to wait for their teacher to know his own grade.

-  Rorschach is an antisocial and angry boy, fully convinced that he isn’t in the wrong place… all the other kids are.

-  Hulk is a good and slightly dumb giant kid (I thought about a young John Coffey from “The Green Mile”).

-  Batman have started to build his suit and his gadgets, but he isn’t very brave yet.

-  Joker is a troubled kid and he doesn’t lose a chance to bother his deskmate Bruce.

-  Antman… well, honestly, he doesn’t have a real characterization. Simply, he amuses me with his tiny desk and his tiny rope ladder.

First of all, I took care of the characters' heads. I sculpted in Zbrush a neutral head, in order to determine the style: a base kid from which to sculpt all the various characters, who should be rather different from each other but belonging to the same “world”. 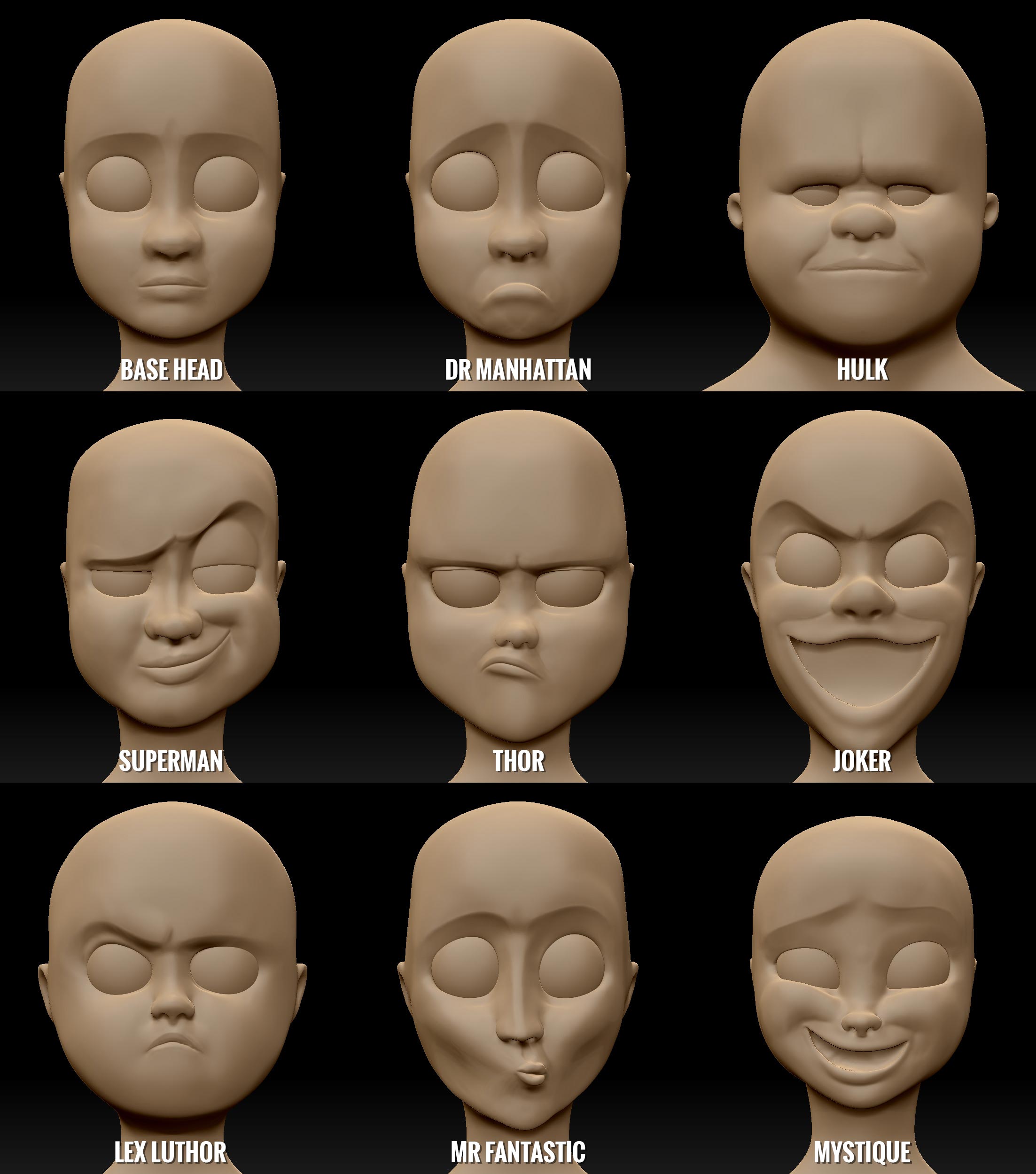 After I had defined almost all faces and expressions, I made a base body and posed each character. I used the same body for all the characters, except for Hulk, for which I prepared a huge and muscular body. 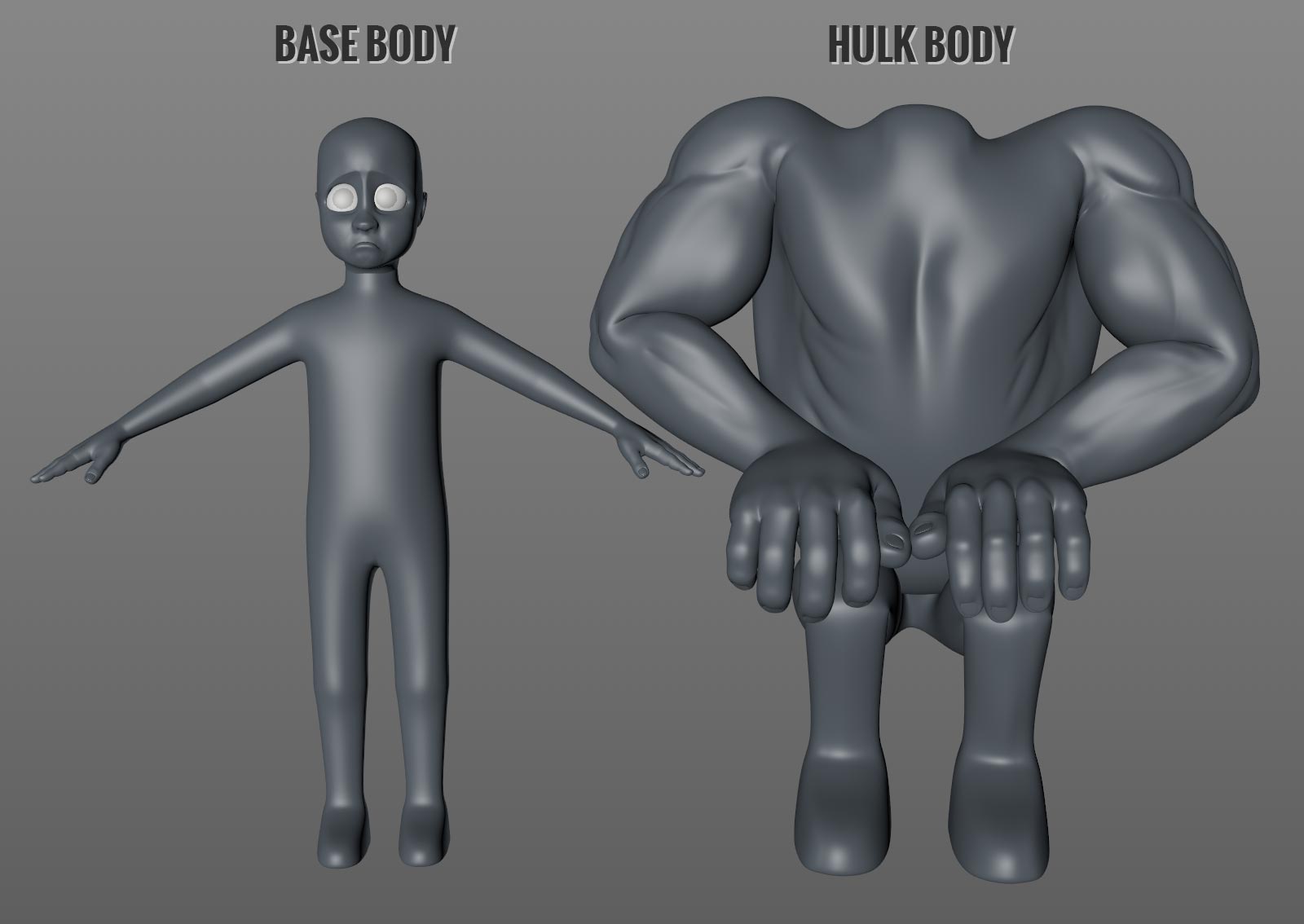 At this point, I prepared the scene. I modeled desks and chairs, then I put them and all the rough characters on set, to define framing and composition. I decided focal length, position and focus distance at once and never moved the camera again. I put attention to the composition: a main action on the left, some correlated situations in foreground, and many unrelated subjects in background. I used Mr. Fantastic’s arm dynamism to balance the composition. 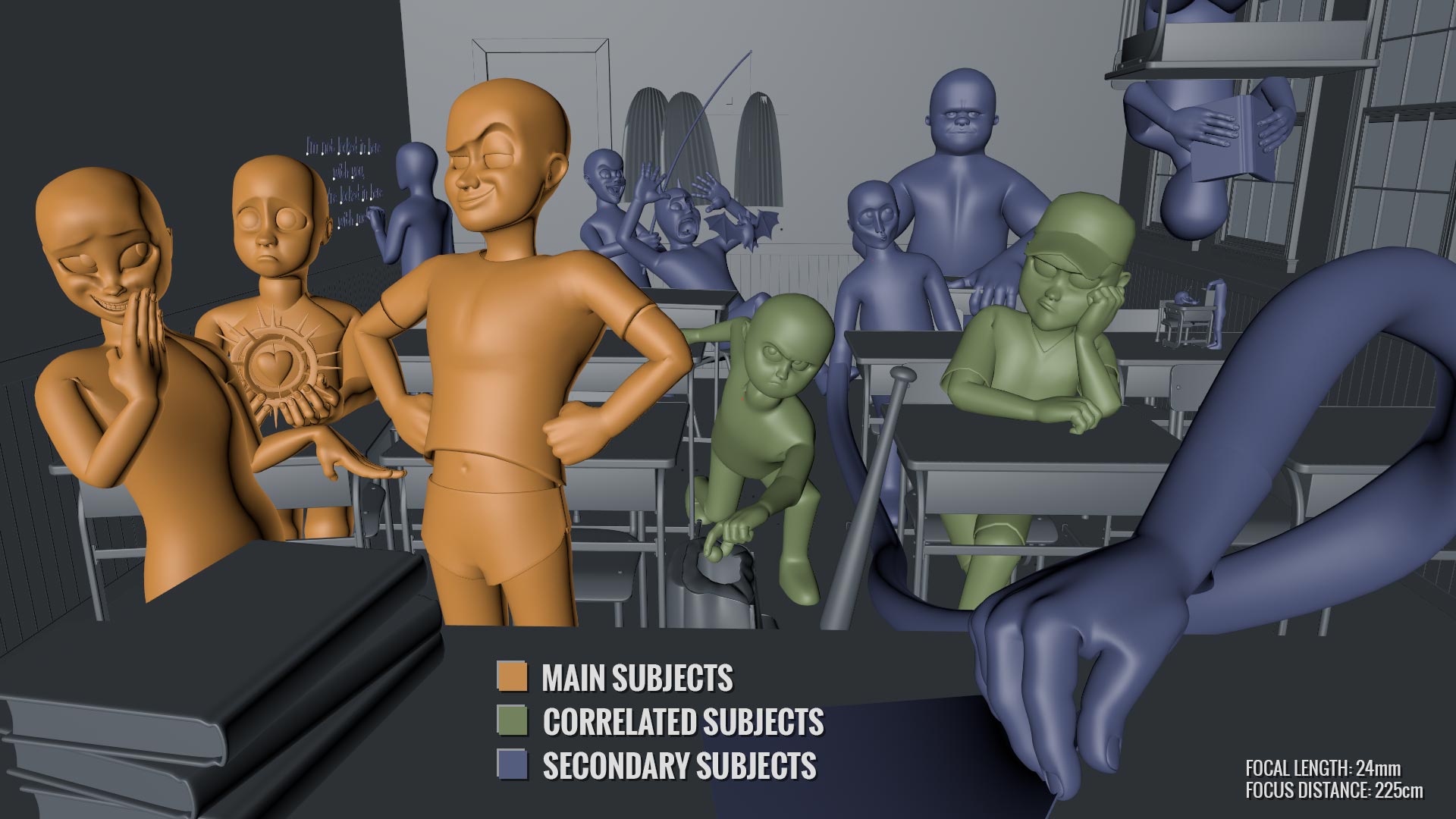 Once I was sure about the whole set of characters, I started to retopologize and refine the heads and attach them on the respective body. In order to compensate the lens distortion, I shrank Mystique’s head and body. I only finalized the visible parts of the meshes.

I wanted to try Marvelous Designer for the clothes. It was the first time I used it, so the result wasn’t very good. For this reason, just three outfits have been made entirely with Marvelous. For some clothes, I started in Marvelous then sculpted in C4D and for some others I directly modeled and sculpted in C4D.

For the characters’ heads, I had to emphasize some features, such as freckles and dark spots, in order to make them visible also for the farthest characters. 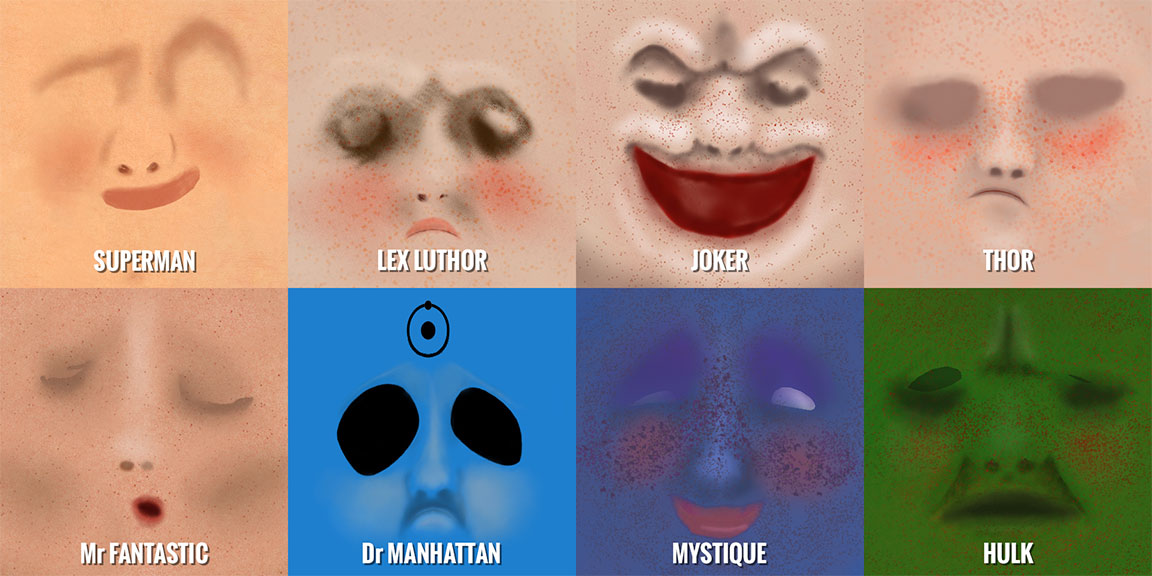 In my cartoon models, I usually prefer to use simulated hair instead of modeled one. Besides, I really love the way V-Ray for C4D render the hair. I often use several hair objects to easily shape the hairstyle. I played with hair count and thickness, in order to use the minor amount of hair. For the same reason, I groomed only the visible hair. For the mystique braid, I used three splines as hair guides. Among all the characters, there are almost 200.000 hairs in the scene.

Most of the props are quite simple objects. They were the last things I modeled. I used C4D sculpt module to soften Superman’s and Mystique’s schoolbags and Mr. Fantastic’s pensil case. The two cape hung on the coat rack has been made with C4D Clothilde, whereas the purple jacket has been made in Marvelous. 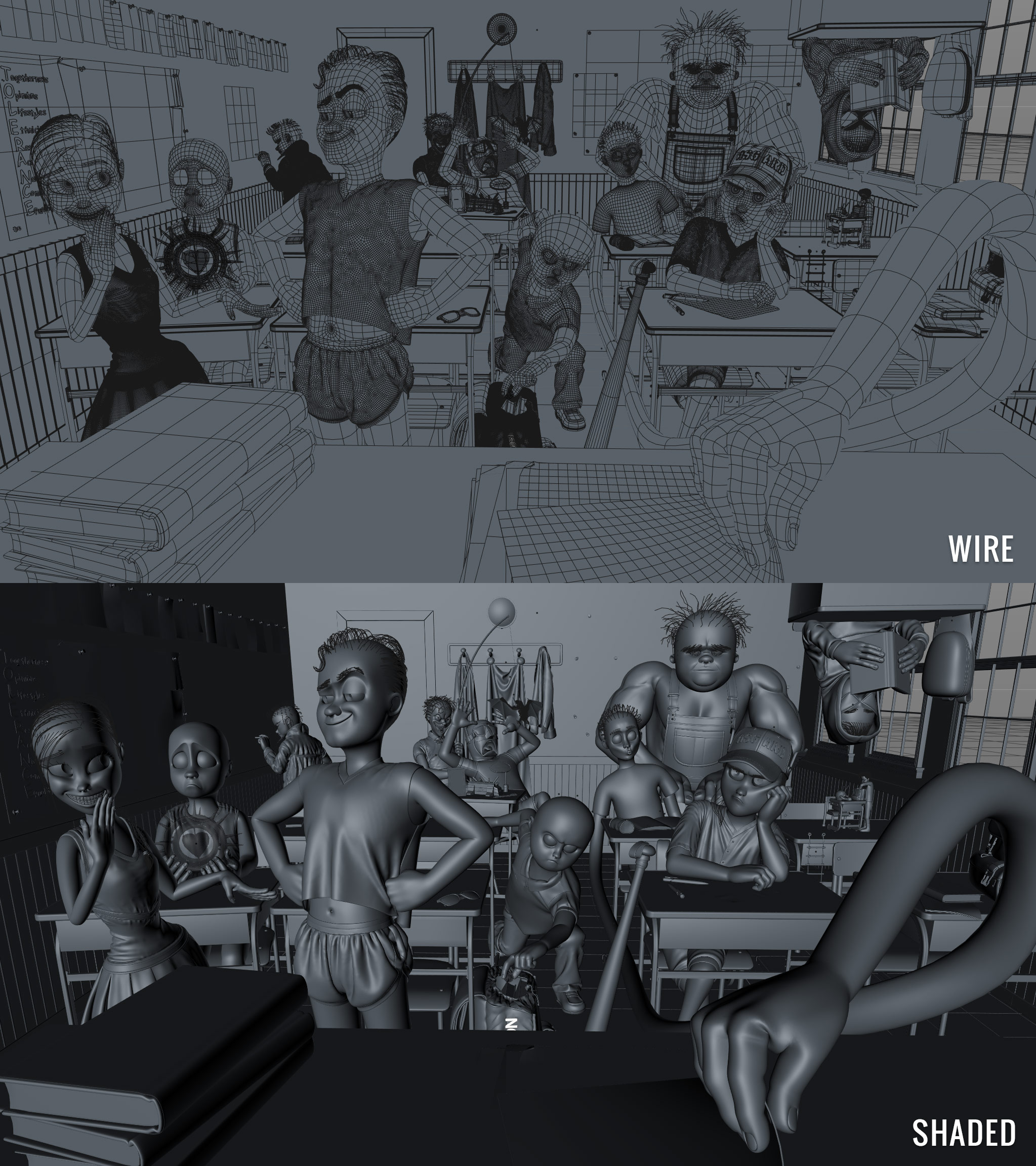 I used a warm parallel light to simulate a low sun, two cold area light for the artificial room illumination, and three omni lights: one fill light for Superman and Mystique, another fill to lighten Thor’s face, under the hat, and a last one to stand out the cobwebs on the Spiderman’s desk. 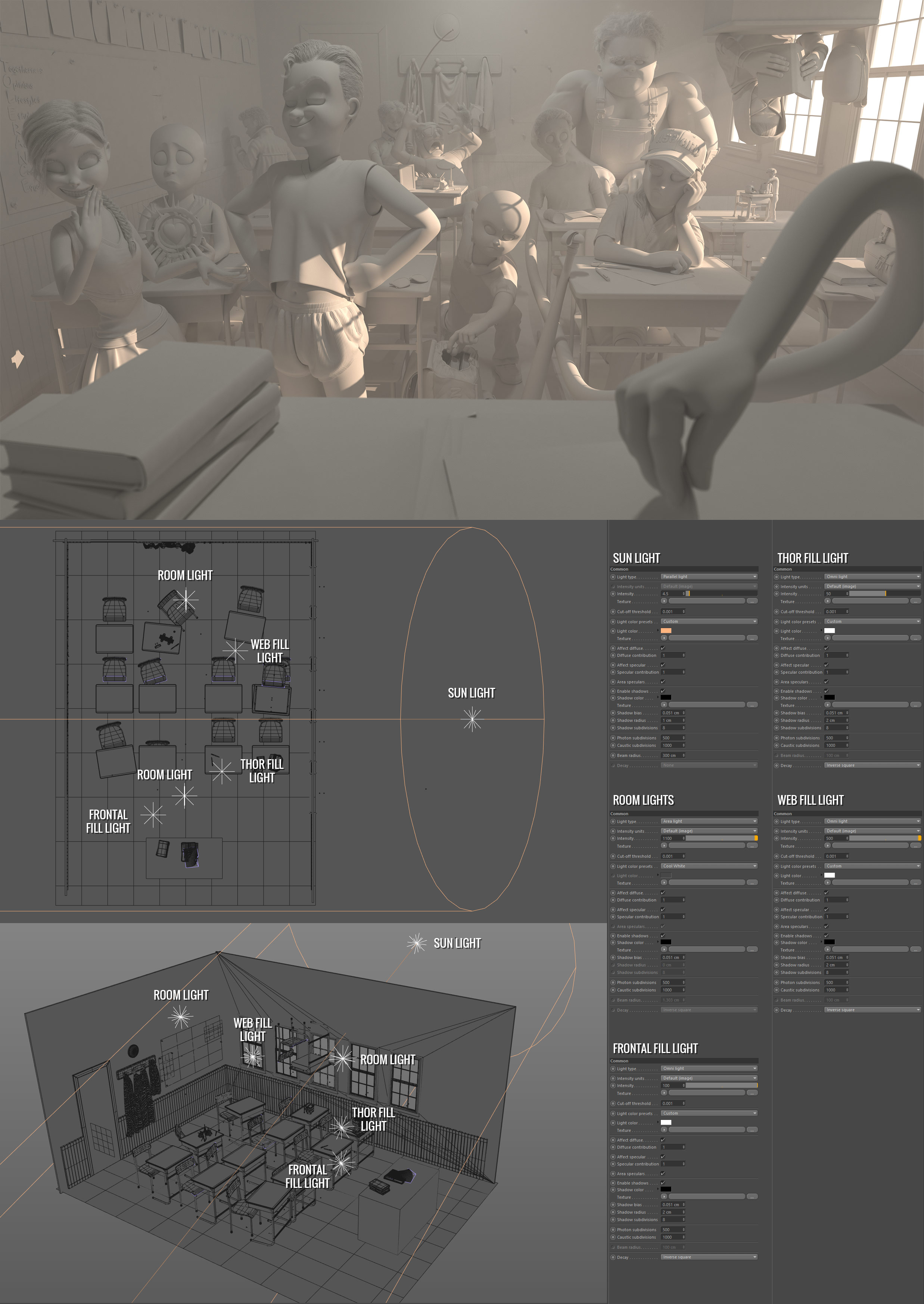 For the characters’ skin I used the vray fast sss2 shader and I modified it for each character. I started with a standard skin that I used for Superman, then I did some variations: whiter for Thor and Rorschach, green for Hulk, blue for Mystique and so on. All Clothes have the same fabric texture, with different colors, except the Rorschach leather coat, the Hulk jeans dungarees and Thor’s hat. The cobwebs around Spiderman’s desk are simple planes with an alpha material.

As previously mentioned, this artwork was started with the intention to render it with c4d physical engine, but in the middle of the process, I changed my mind and I rendered it with V-Ray for C4D. So, I converted all the shaders in V-Ray materials. I reached a far better result compared all the previous materials, except for Dr. Manhattan. I wasn’t able to enhance his shader, so I just decided to keep the original Dr. Manhattan render. 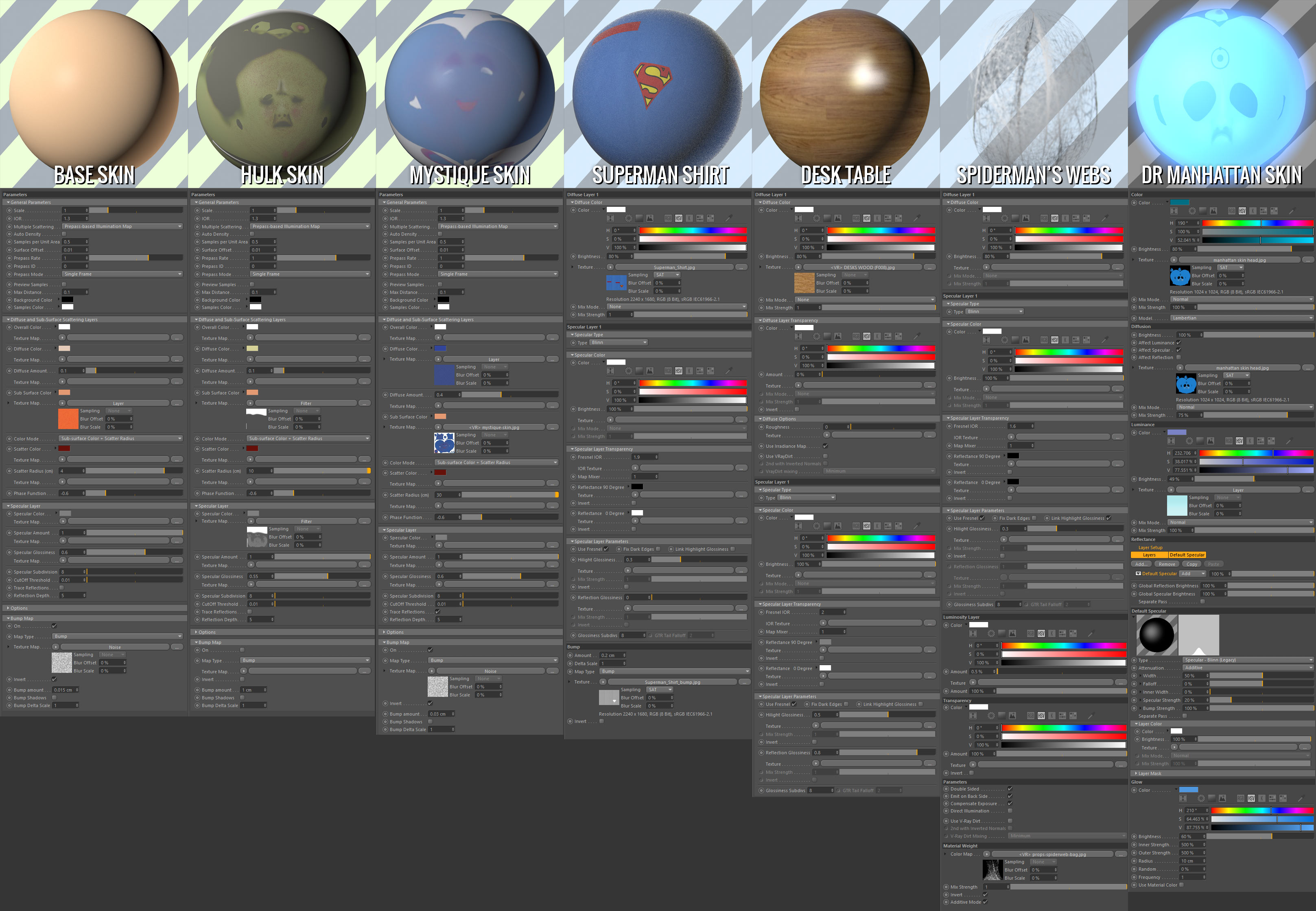 I used a simple preset for the global illumination, with Irradiance Map as primary engine and Light Cache as secondary. For the haze, I used Environment Fog and a huge sphere as gizmo. 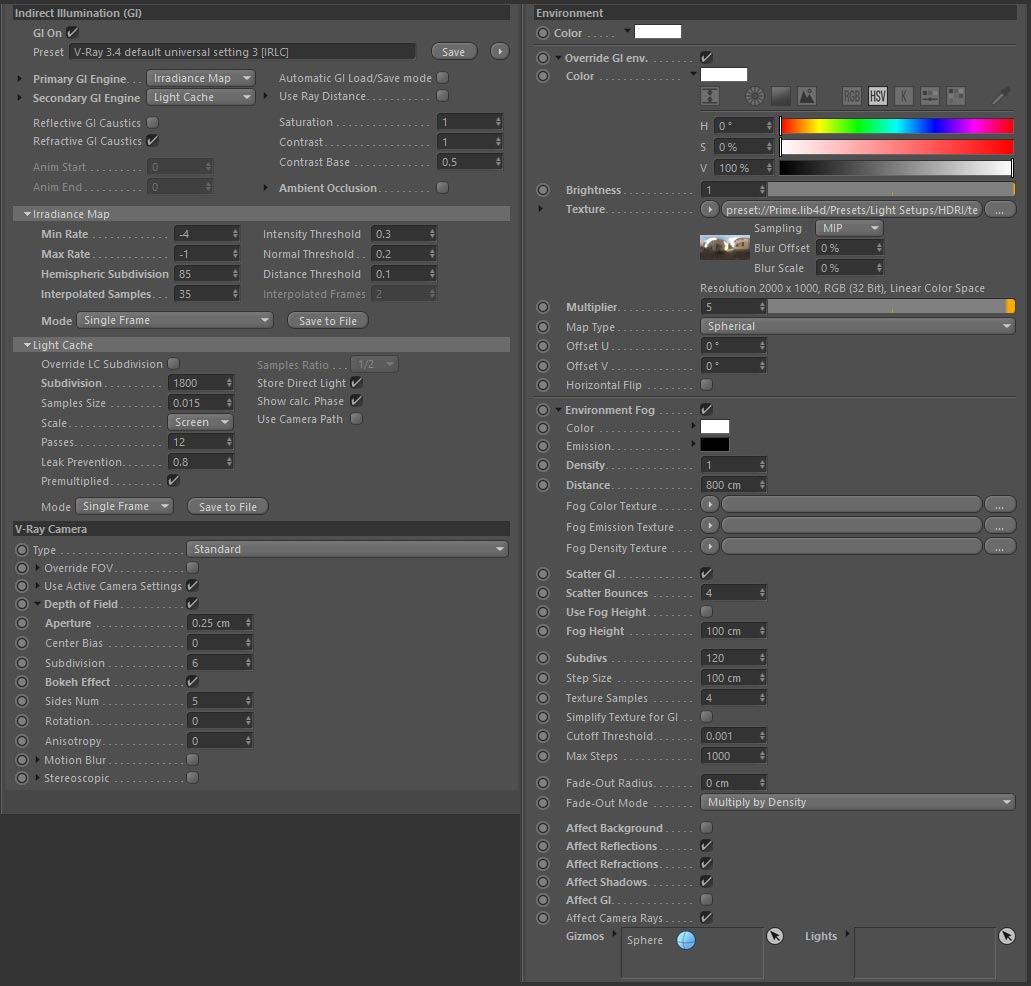 In Photoshop, I composed the V-Ray rendered scene with C4D rendered Dr. Manhattan. Then I made few minor retouches and color correction. 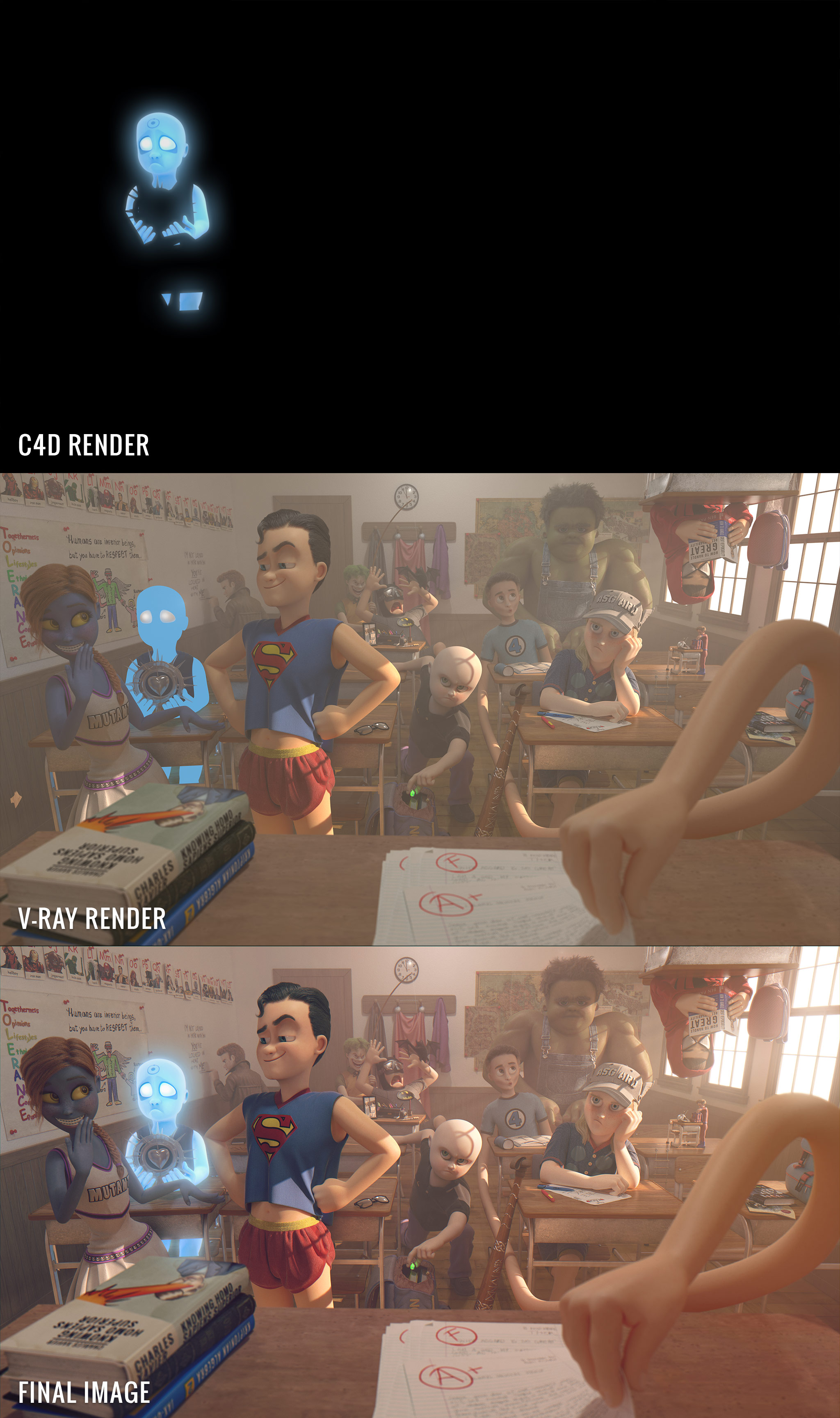 From the very beginning, I wanted to fill the scene with as much details as I could, some easy to catch and others more hidden. Starting with the characters, who don’t wear their iconic costumes, but quite ordinary garments with many references to the respective suits.

I had a lot of fun in putting silly props, like the bat school gadgets, and in creating fake book covers. Some desk objects should give a hint about its owner: for example, a desk with a leather journal and an engraved symbol in the wood, or a desk with books about the color blue and own body issues. Some details are hard to see, but I thought it was still amusing. 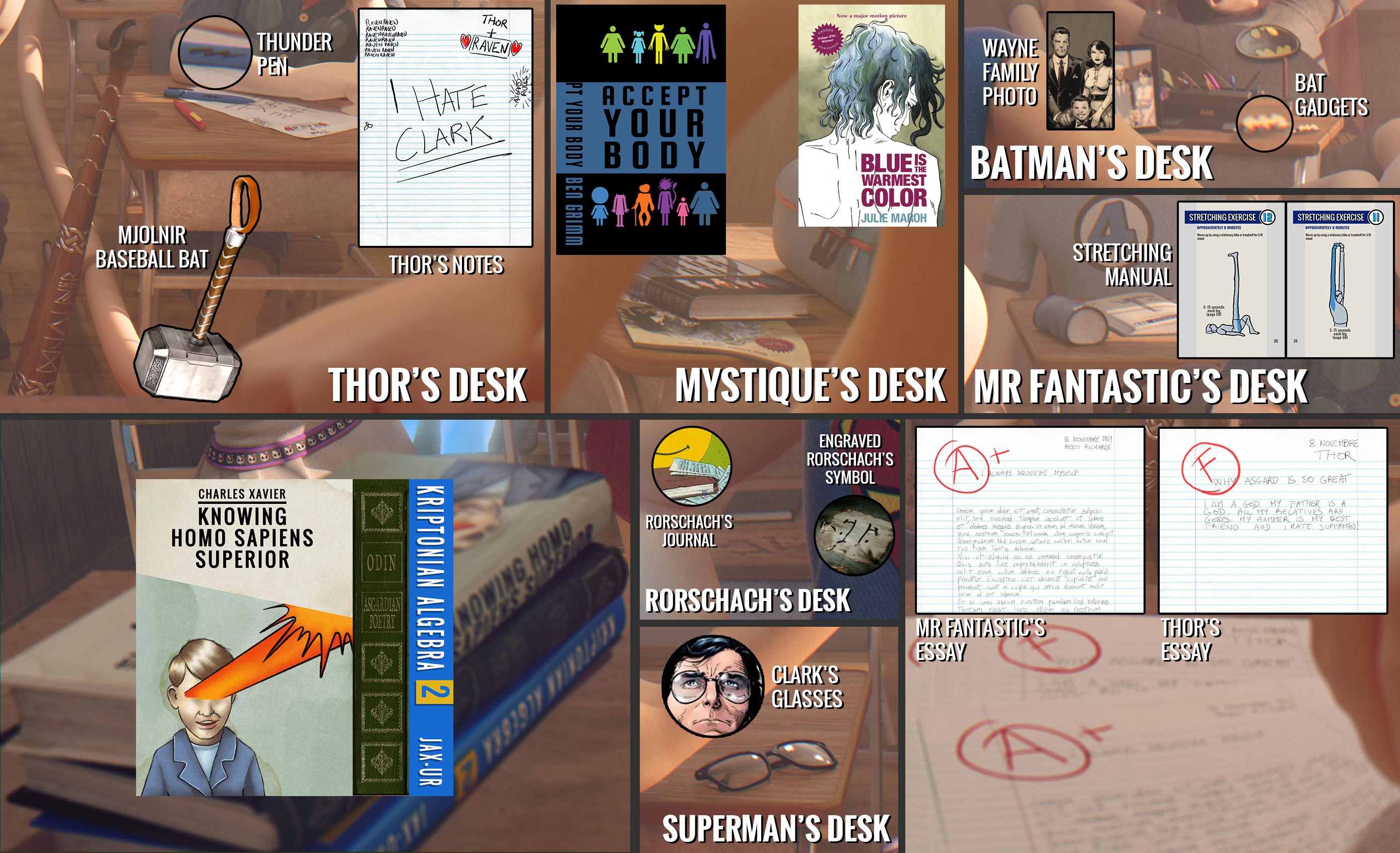 For the walls, I wanted to mock a real classroom, with alphabet chart, maps and a politically correct bulletin board, obviously all reinterpreted for a superheroes class.

That’s all, I hope this making of can be useful for someone. Enjoy it!