Making of the web series "Life sucks! But at least I've got elbows"

A few years ago I was very active on Treddi.com, where I involved a lot of forum users in the NEIGHBORODD project.

Now I post from time to time, especially to show off my finished works (like THIS or THIS).

For me, 3D graphics (and animation in general) is more of a “hobby”, a parallel industry to my usual work with live action footage and actual actors in the flesh, as you can see on my showreel:

My CG work is driven by passion - which is justas well because my budgets mean that 99% of the time I end up tackling all elements of production myself. (Modelling, texturing, rig, animation, lightning, render and final compositing!).

I have recently launched a new international project, a web series (12 x 90 second episodes) entitled LIFESUCKS! BUT AT LEAST I'VE GOT ELBOWS.

Written with Matt Willis-Jones, a brilliant and crazy English writer-director, the series takes an irreverent and satirical look at life's big issues (love, death, religion, etc.) and as usual, I made it for almost zero budget, personally investing a lot of time andsome loose change I found behind the sofa.

In this ‘Making Of’ I’ll outline the methods used throughout the series, using as examples images from the third episode, released on June 22. 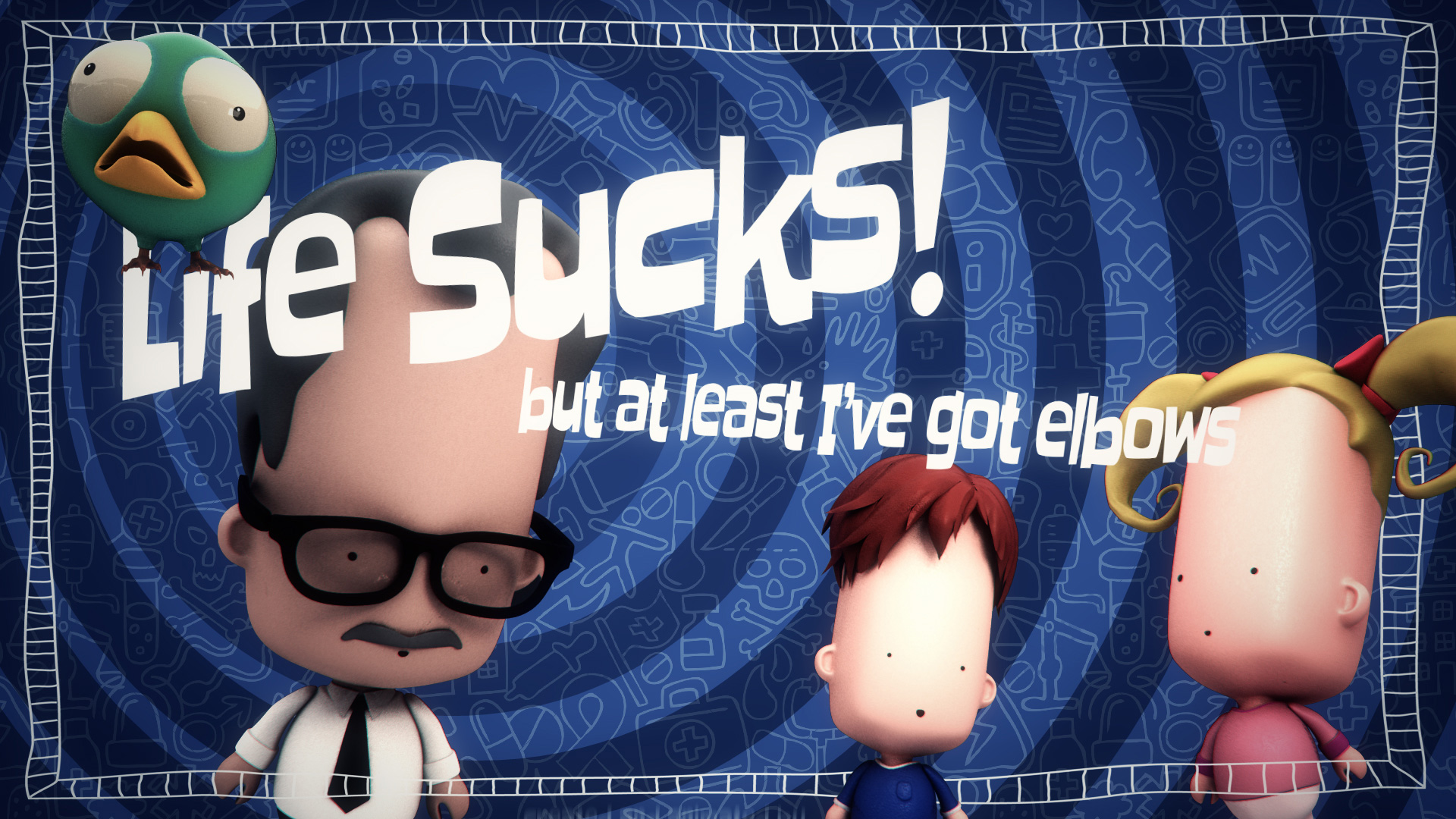 The initial idea was to create a series where the animation and the render times were kept to a minimum, giving more space to the dialogue.

I cast the voices on an online forum, where I found two young and  talented  girls for the roles of the children, as well as Michael McConnohie to voice the father - quite a famous actor who has voiced a lot of cartoons and video games, including Transformers, Digimon, World of Warcraft, Finaly Fantasy... 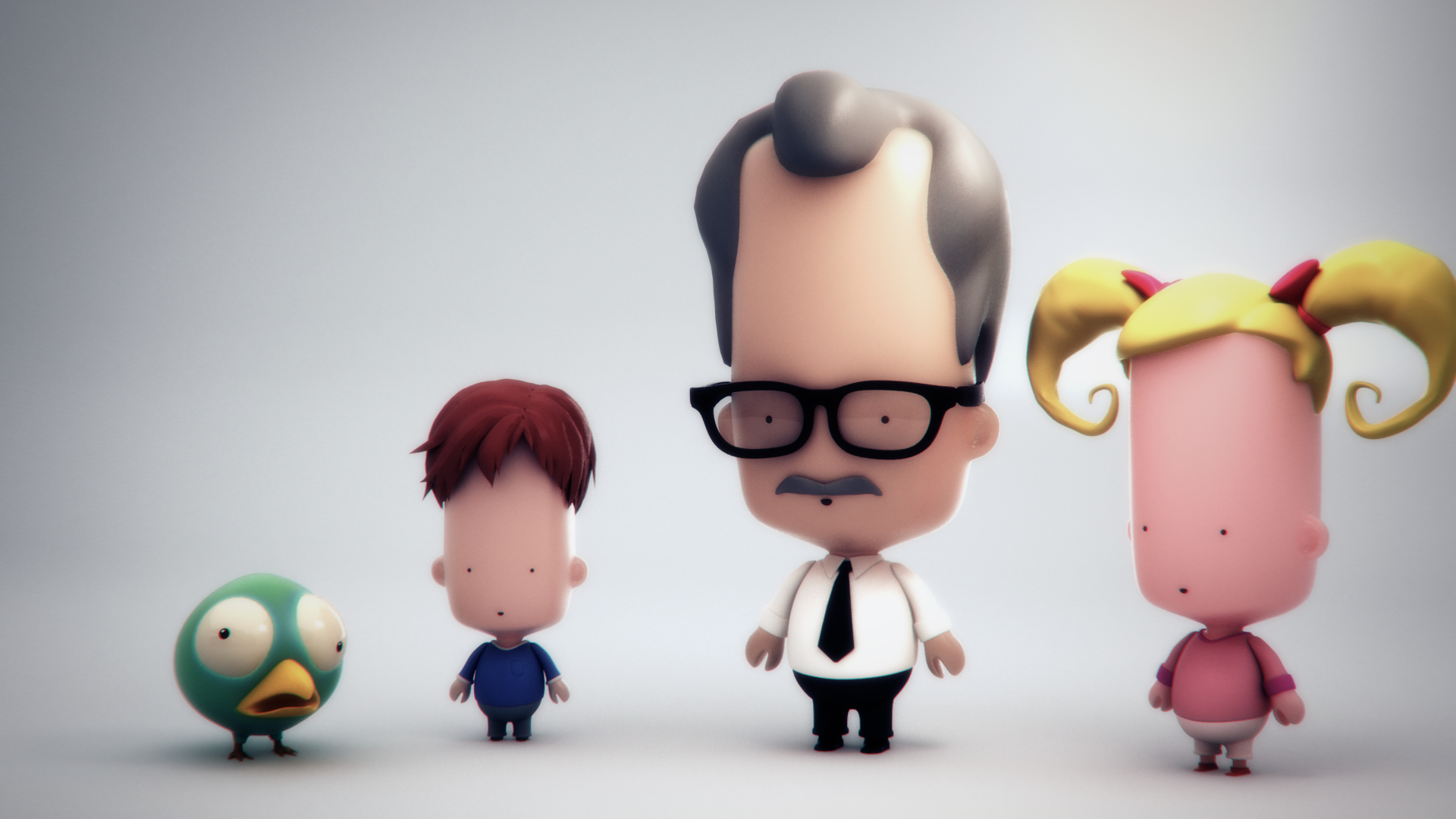 I first designed the "puppets" of the protagonists - all low poly with very simple shapes with TurboSmooth applied in the render phase.

The shaders are quite basic to optimise the calculation time, which are in the order of 2 minutes per frame (although I stubbornly insist on using VRayFastSSS for the skin, which isn’t very fast) with FullHD 1920x1080 resolution on a PC that isn’t optimised for graphics: AMD FX-8350 eight cores, 32GB of RAM, NVidia GeForce GTX 660 Ti.

I also have a "mule" PC that I use to support longer render, but it takes about 4/5 minute per frame.

The result is still not exactly "noise free" and I have to do a bit more post-production work in After Effects to optimise the render, but I really cannot afford more than a 2-minute frame, considering that I'm releasing one episode a week. At 2 minutes per frame an average 90 seconds episode (25fps - so a total of 2250 frames) requires 75 uninterrupted hours to render!

In terms of software I use 3D Studio Max for modelling,V-Ray for rendering, After Effects for compositing and Premiere for editing. 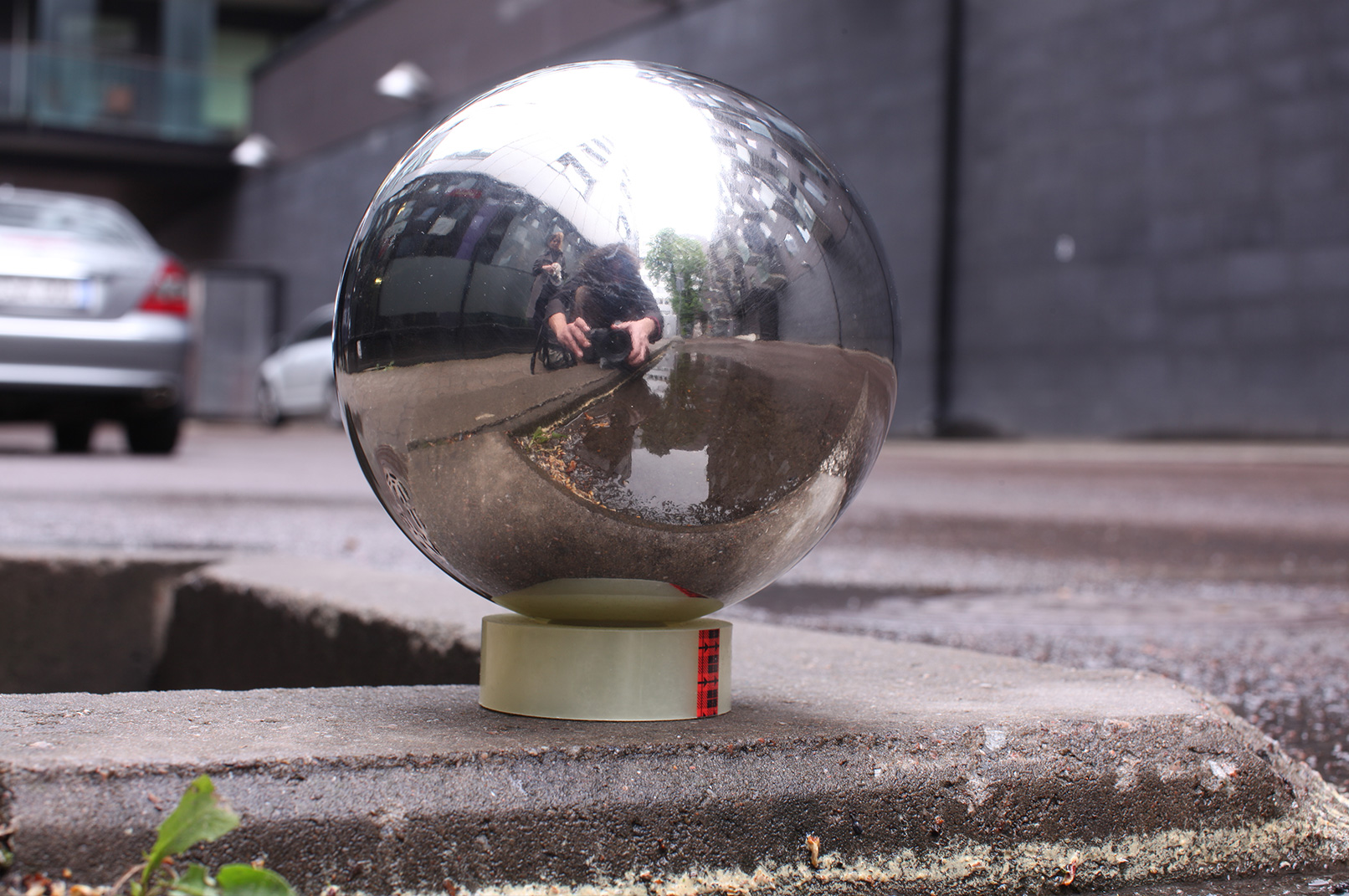 The biggest challenge was integrating the CG characters into the real environments as believably as possible.

The "classic" method was to get a steel ball, the kind used as a garden ornament, 13cm diameter, ordered on Amazon for about ten Euros, photographed in High Dynamic Range (HDR) in the various location, performing 7 shots at different exposures, a very efficient operation thanks to the Magic Lantern firmware for my Canon 5D.

The resulting image contains sufficient information of the quantity and type of light present in the scene, and is useful for the reflections of the shaders, such as on the father's glasses.

The HDRI is therefore essential for optimum integration of 3D characters into the live action backplates, and was used for the environment map and texture for the main light VRay-dome.

To help me composite the characters into the real environments, and to have a visual reference for the incidence of light on stage, I also made  4 "dummies" - roughly the size of virtual characters - out of a neutral grey clay, which I then photographed in the real world scene to see how the colours, the lights and shadows would affect the protagonists. 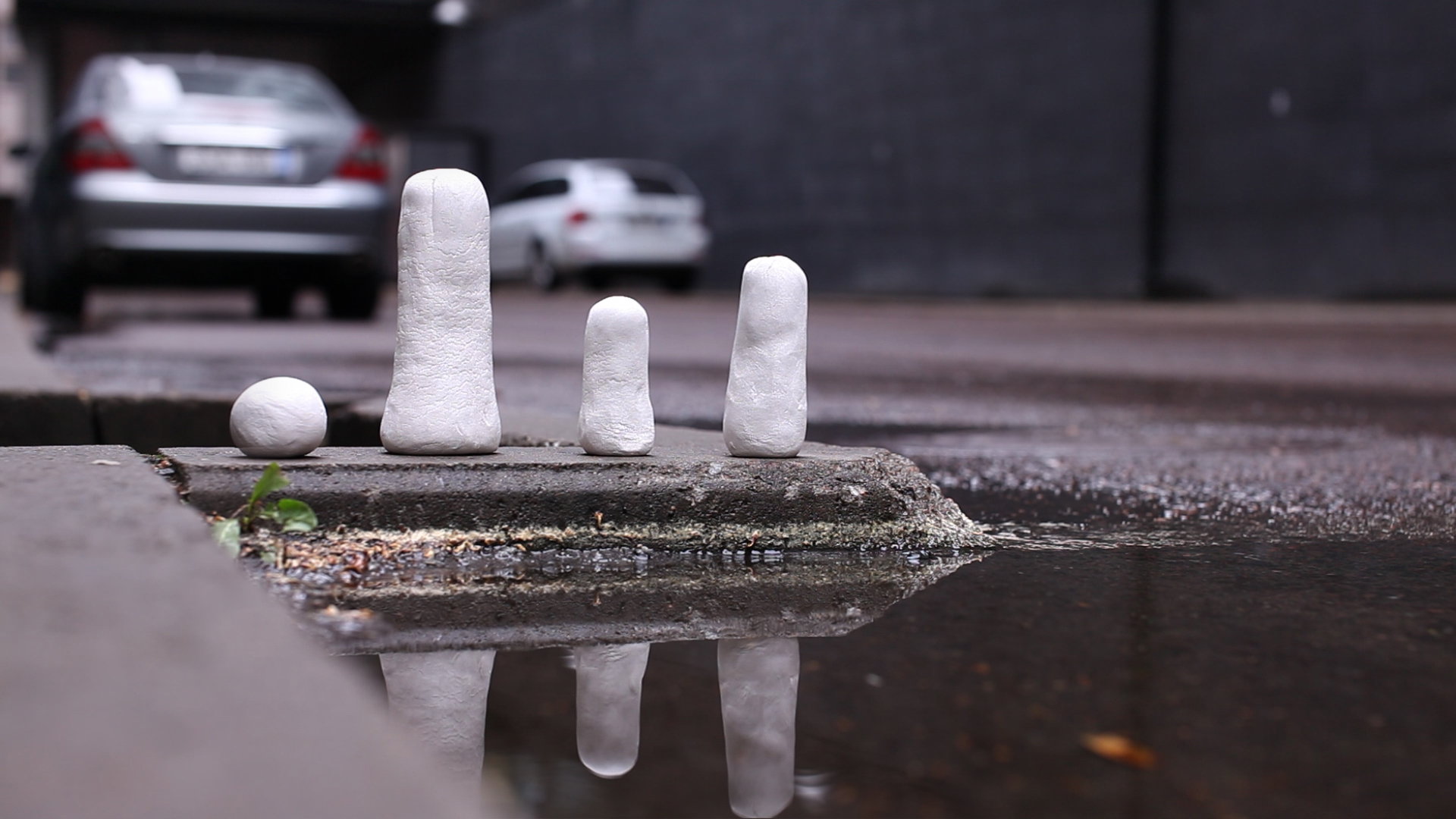 After making the picture of the reflecting sphere in HDRI, and having placed the dummies to make the shot and have a real visual reference, I recorded a clean plate of the background for about 2-3 minutes.

Of course I also took note of the focal length and exposure of the real camera, and then replicate it in 3D. I mainly used a 50mm lens and a 85mm, with variable apertures, depending on the location. 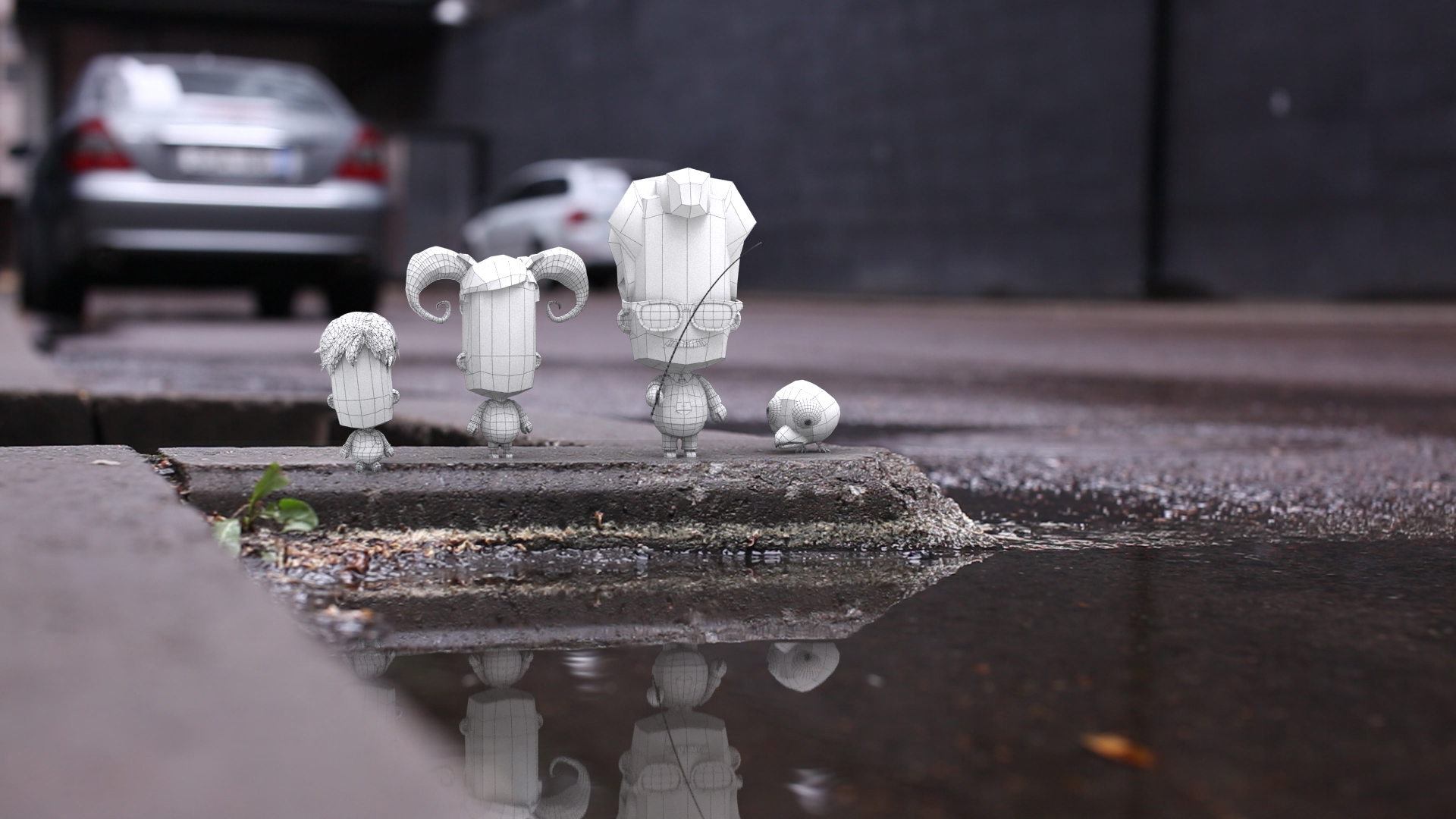 Once the scene had been replicated, for a comparison with the clay dummies, I rendered the characters with a shader of the same light grey.

For the ground surfaces, which range from sometimes soil to reflective surfaces (such as water) I replicated as closely as possible the real life ‘shader’, which I then applied to a "VRayMtlWrapper" material to manage the transparency (alpha). 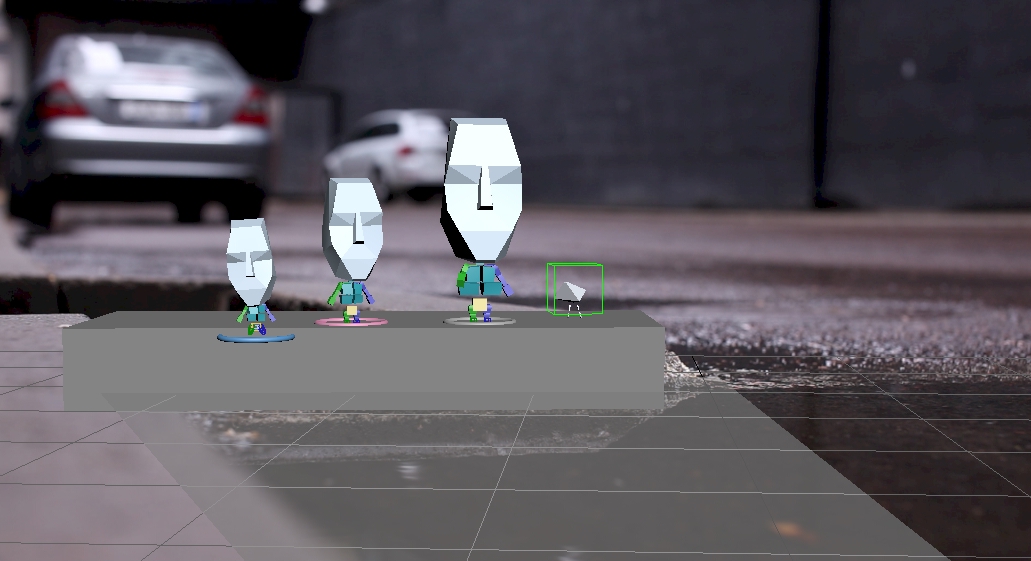 The animations are made pose-to-pose using the standard 3DsMax biped. I also tried a low-cost motion capture, using the Kinect of Microsoft (a method I used in THIS video), but given the very caricatured characters (giant heads on egg like bodies!) it took more time to adjust the mocap than animate from scratch! 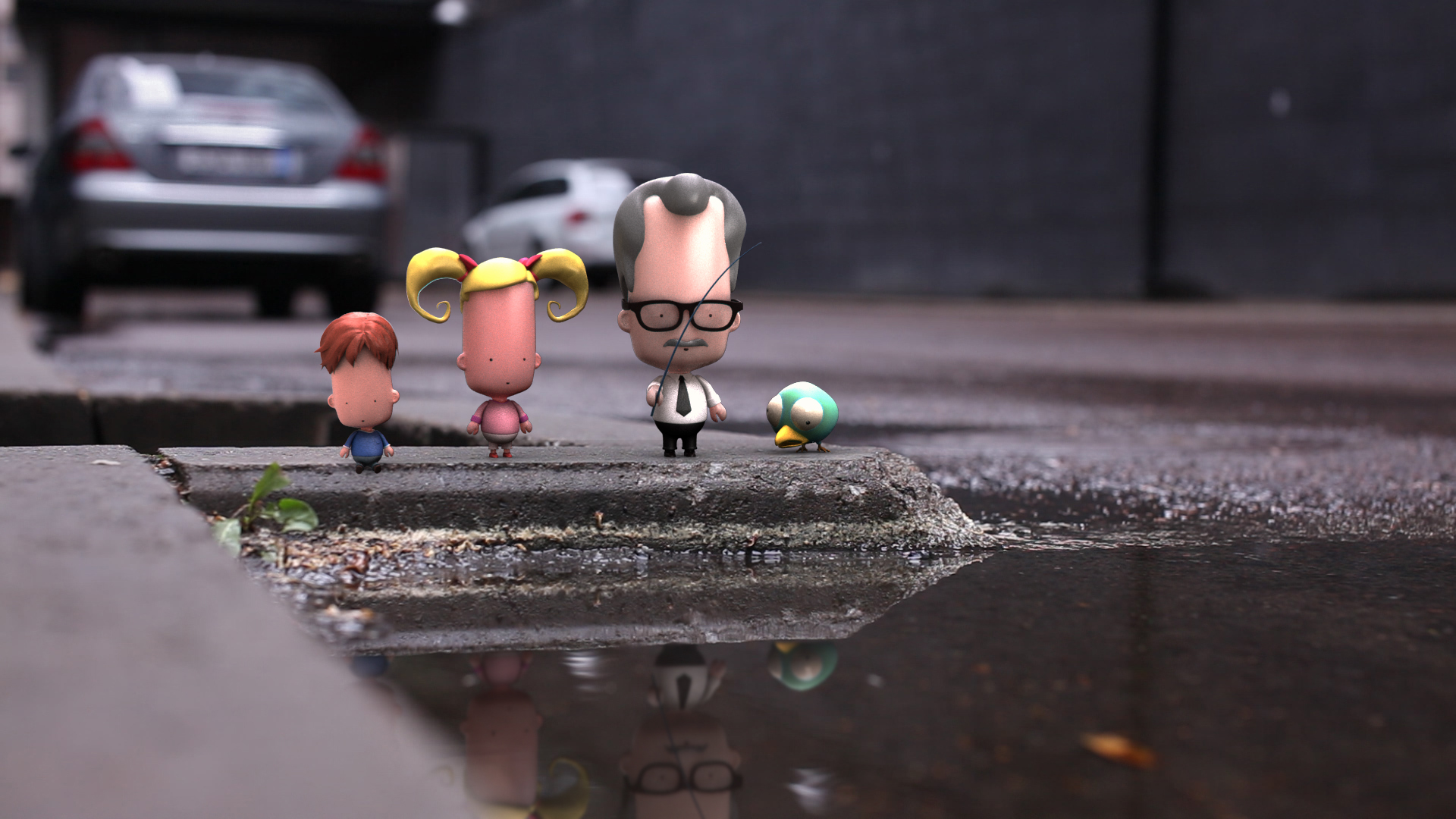 Always seeking to optimise time, I rendered several steps in one go, then composited in After Effects where I matched the depth of field (ZDepth).

It is true that the characters are almost entirely in focus, but given their size, the depth of field is very low and even a shift of a few centimetres affects the blurring, which is well replicated in the CG images.

Of course the images produced by 3D Studio Max still require processing in addition to the compositing of the various passes, for example: tweaking the colours or brightness, by adding a slight chromatic aberration, masking the unnecessary or what does not perfectly fit the environment, and so on. 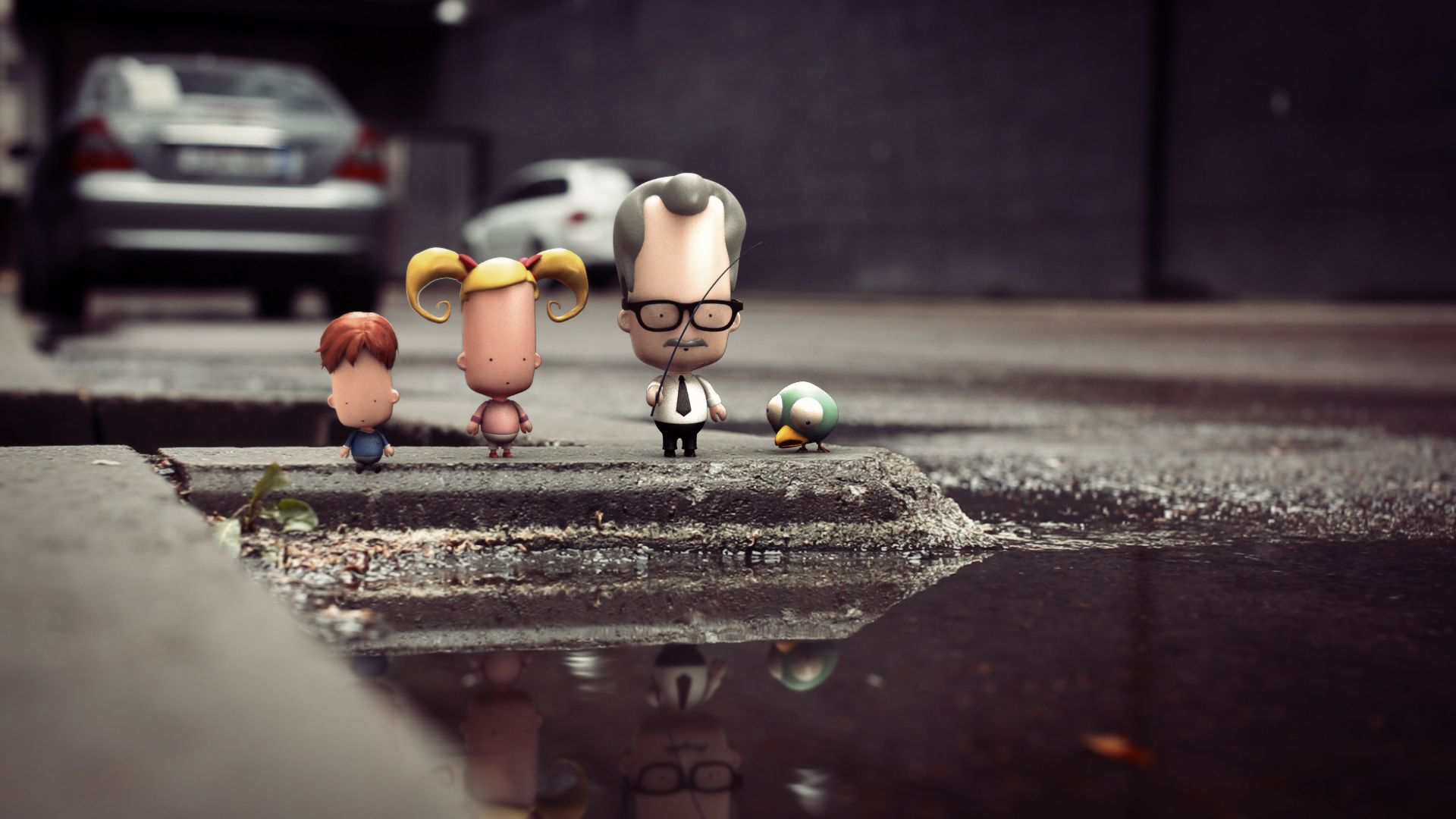 Finally, I used a filter over the whole film to achieve a cinematic look and further integrate the characters into the environment.

Clearly it is still a cartoon and not completely photorealistic - but making a 100% perfectly convincing render was not the intent here (nor is it within my abilities or schedule!).

Of course, with more time, an adequate budget, more people in tow and the best knowledge, the product could be more professional but considering the various points mentioned above - I think the overall result is more than decent.

This is episode 1, if you’d like to check it out.

In short, I am working on this project daily, and at the time of writing the first two episodes are out, as well as the trailer and a totally insane psychedelic little video of one of the characters I hope to go viral.

The 12th and final episode of the first season will air at the end of August. I started this project from scratch, with no budget, no contacts and no marketing strategies, so we are very much counting on it being shared by anyone passionate about the series.

I hope you have found this "Making of" interesting and informative - and more importantly intrigued to check out LIFE SUCKS BUT AT LEAST I’VE GOT ELBOWS!